Perhaps this review will be a little biased… I absolutely love the Hard Case Crime imprint and find myself keeping an ear to the ground for their upcoming releases while also rummaging through used book stores for their previous ones. They look good on a shelf and make the reading voice in my head sound like Humphrey Bogart, off his guard and weary from too much whisky and twisted love interests. That’s no bad thing.

Specialising in hardboiled noir fiction (usually with an American slant that nods in the direction of Chandler, Hammett and MacDonald), Hard Case Crime are responsible for bringing to my attention some gritty, delirious and blackly funny diamonds in the rough from new scribes to heavy hitters of the genre like James M Cain, Brett Halliday, Ed McBain, Donald E Westlake and Mickey Spillane.

One of their biggest signs was with Lawrence Block who penned their debut title, Grifter’s Game as well as the Matt Scudder novels like A Walk Among the Tombstones. There’s plenty of Block available on Hard Case Crime and it’s Block who wrote Sinner Man, their latest release. But it’s not been a breezy journey. The story behind its eventual publication as the author intended is a long, labyrinthine one that rivals the search for the Maltese Falcon – the stuff of which dreams are made of, Bogie might have said.

Sinner Man was the MWA Grand Master’s first crime novel, penned in the mid 60s, which came at a time when he was ghostwriting “lesbian fiction” and other under the radar gems as the afterword from Block himself informs us. Moving between publishing houses and various contacts Sinner Man did somehow get published under a pen name in a heavily revised version with a different title. It slipped so far under the radar that Block himself forgot about it until it was proposed to search the used bookstores, eBay and social media for a trace of it with the aim of giving it the release it deserved. One blog post plea and a Facebook tag later and the old version was discovered, prompting Block to brush it up and Hard Case Crime to release it. Extended backstories aside, I’m so glad they did. This is a beaut of a novel.

It finds insurance man Don Barshter living that Revolutionary Road-esque non-existence in which the American dream of the car, house, wife and easy life was a hollow nightmare that led its war-ravaged men to abuse their housewives and give America a decade long hangover that only a whiff of flower power could shift. We open with Don arguing with his wife in their Connecticut showhome. A drink and a slap goes south and his wife falls to her accidental death. Don bolts town and here’s where the plot really hooks you: he doesn’t go into hiding to avoid a life of crime but instead decides to establish a new identity as Nat Crowley, an upcoming gangster new to Buffalo, New York. In for a penny, in for a pound of flesh.

Block grants his eager audience a beautifully paced examination of determination, honour, violence, sex and identity. We believe the transformation from nobody to hood, are troubled by the prospect of it unraveling, intrigued by the idea that it might not and also simultaneously gripped by a cold central character’s metamorphosis. Don/Nat’s u-turn affords the reader a riveting glimpse into an underworld populated by a rogues’ gallery of fractured characters who have a habit of sealing their own fate. It’s a rare novel that takes familiar archetypes of a genre and throws them into unpredictable situations contorted via the contradictions of its central character.

Sinner Man is one of crime fiction’s most exhilarating rediscoveries. Half a century in the making, the icing on this intoxicating cake is the wonderfully pulp hand-drawn illustration on the cover – the kind that drew me to Hard Case Crime in the first place. Be sure to pick up this great novel. It’s been worth the wait. 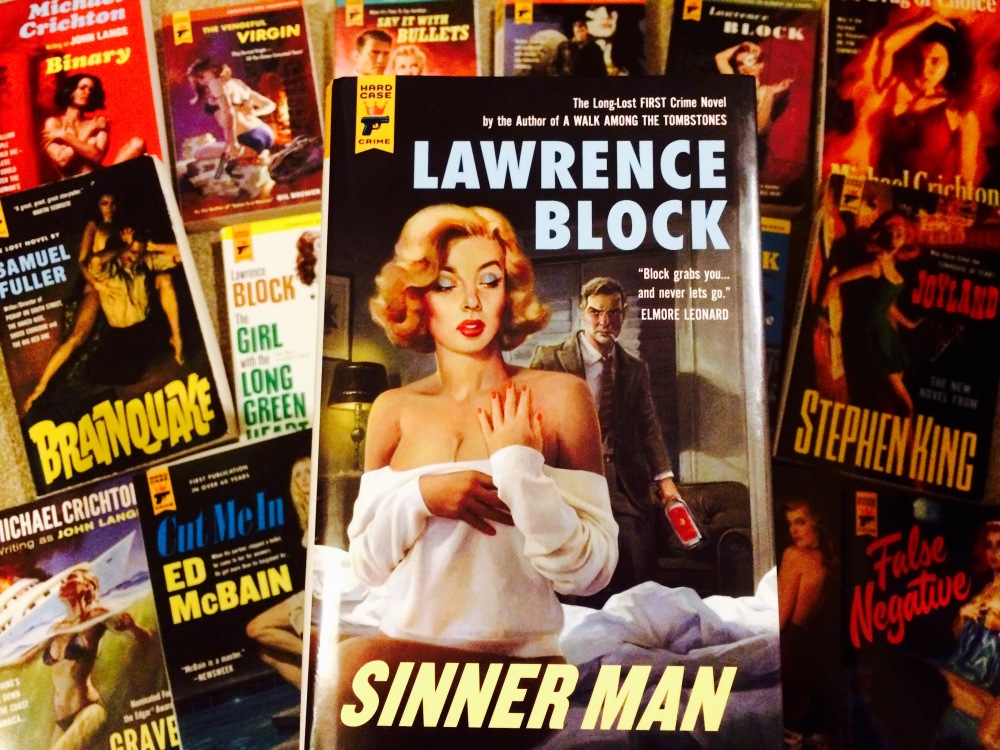